The loud discourse on Islam in the United States today marks Muslims as a threat, embroiled in pre-modern sensibilities, and unable to participate in democratic societies. These articulations are often made by recycling colonial and oriental images of Muslim women as oppressed and Muslim men as violent, with objects such as the hijab and the figure of the terrorist at the center. This rise of Islamophobic commentary has resulted in myriad incidences of bullying, teasing, and direct violence against teachers and students who identify, or are read by others, as Muslims. All this points to the lack of understanding about Islam and Muslims in the United States. This panel will argue for the urgent need for religious literacy and introduce the Cultural Studies method to understand Islam and Muslims. 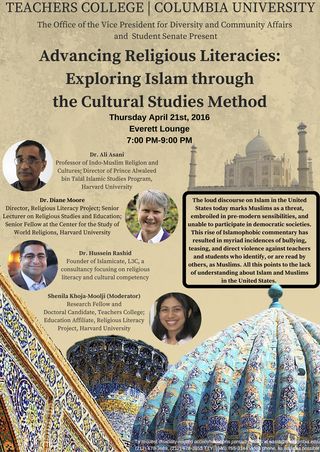 Posted at 09:53 AM in Events, Inter-faith, Religion | Permalink

I'll be speaking at the following conference on a Muslim theology of Black Lives Matter. I've spoke at the church before on a similar topic, but this will be different.

Our nation is in a crisis. Though there is only one race — the human race — racism is a construct with lethal consequences. People die while in its custody. Racism has annihilated the souls of citizens and ripped out the heart of our nation. Recent surveys show that 60% of the people in our nation think race relations are in a significant decline, that our dream for justice and equality is dying on the vine.

At the 10th annual Leading Edge Conference and the 6th annual Transform Network Gathering, we will learn and teach each other the best practical wisdom for movement-making, mingled with theoretical underpinnings and theological reflection. Join thought leaders like Chris Crass, Melissa Harris-Perry, Jim Wallis, Jacqui Lewis, Huseein Rashid, and Miguel De La Torre; and activists like Linda Sarsour, Micky ScottBey Jones and Valarie Kaur. In plenaries, short talks, and small group conversations surrounded by music and art, we will create strategies for change.

Activists, analysts, preachers, poets, prophets, teachers, trainers, writers, queer, and straight folk of all faiths ready to make a change: Come and bring your hopes, disappointments, and dreams. We must disrupt the narrative of white supremacy if we are to be free. We need tools, tactics, and truth-telling to dismantle racism.

Ours is #PropheticGrief. Even in our anger and tears, we are ready to do something, to organize. This is a multi-faith, multi-racial movement. Those of us who are disgusted with the status quo are called to join the movement if we are to save our nation, save our world, and save our souls.

Posted at 09:58 AM in Events, Inter-faith, Religion | Permalink

elumenati is the company that did a wonderful immersive architectural experience for the Children's Museum of Manhattan's America to Zanzibar exhibit. They have posted a promo video that only hints at how great the experience is.

Posted at 11:47 AM in Inter-faith, Religion, Video | Permalink

Meanwhile, Hussein Rashid, a research fellow from the Truman National Security Project, a non-profit that works towards principled solutions for global challenges like terrorism, applauded the commissioner’s statement that underlines that Muslims are a part of New York’s diverse community. “The New York Police Department has really publically understood where they went wrong in a lot of their surveillances, [and] really spoken out against people who want to replicate this at a national level,” said Rashid.

Posted at 11:40 AM in Media Appearances | Permalink

Newsday on America to Zanzibar

Here is a Newsday article on the exhibit America to Zanzibar: Muslim Cultures Near and Far, at The Children’s Museum of Manhattan, for which I was the lead academic advisor. It's a good chance to shout out my friends from high school.

“Our goal is to have children deal with differences in a healthy, positive way and encourage them to be inquisitive while exploring the world instead of running away from its differences,” Rashid said, an experience not so different from his years growing up in Elmont.

Reuter's Coverage of America to Zanzibar

Here is a Reuter’s video on the exhibit America to Zanzibar: Muslim Cultures Near and Far, at The Children’s Museum of Manhattan, for which I was the lead academic advisor. I had no idea the tie was rakishly crooked.

The Muslim Culture Exhibition on TRT Showcase from Reuters Content Solutions on Vimeo.

Posted at 09:33 AM in Events, Media Appearances | Permalink