Home About Me Blog Media Appearances Events Photos Subscribe
Watch This Animated Tale of 'The Secret History of Muslims in the U.S.' | Colorlines
“On Common Ground”: CIW, faith leaders come together in NYC for “an extraordinary conversation”… – Coalition of Immokalee Workers

Panel on 28 January 2019 on farmworkers' rights

I’ll be speaking on a panel on Jan. 28 on food workers’ rights.
"On Monday, January 28 join us at the Church of St. Ignatius Loyola in NYC as we explore the vital connection between faith and the advancement of human rights through a panel discussion with the Coalition of Immokalee Workers’ Gerardo Reyes-Chavez, theologians Brian McLaren, Obery Hendricks, and Hussein Rashid, Rachel Kahn-Troster of T’ruah and moderated by Noelle Damico of the Alliance for Fair Food!

Today tens of thousands of farmworkers in seven states are harvesting free from slavery, sexual violence, and fear through the Fair Food Program which Harvard Business Review called “among the most important social impact stories of the past century.”  Now the program’s model is being translated to supply chains around the world.”

http://www.allianceforfairfood.org/on-common-ground
The event is free and open to the public. 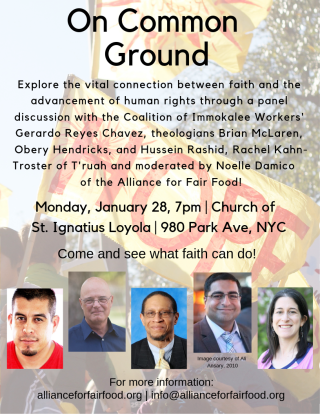