“Navigating [these politics] came through people like Bryonn who walked me through that racial consciousness and turned that into something very practical,” New School professor Hussein Rashid, who graduated from Columbia College in 1996, recalls. “We had a lot of agency coming into this protest tradition at Columbia.” As campus activists, Bain and his peers in various campus affinity organizations not only challenged institutional injustice at the administrative level but also at the student level. He and others who fought alongside him on issues related to race and racism on campus publicly criticized Spectator’s perceived complicity in upholding structural racism at the University. “Their reporting was very deferential to authority,” Rashid—who wrote several pieces critical of the paper’s treatment of Black and Latinx voices and concerns—says. “There is so much talk about racial justice and equity in these spaces coming from ‘changing the narrative.’ What we really need is a movement that changes the narrators,” Bain adds.

I was fortunate to moderate a panel on spiritual struggle during the lifetime of Omar ibn Said for the Spoleto Festival. Video is embedded below.

Posted at 09:58 AM in Inter-faith, Media Appearances, Religion, Video | Permalink

Streaming services like Netflix, Hulu and Disney Plus, hungry for content in a competitive space, offer more opportunities for diverse stories to be told, says Hussein Rashid, an academic whose research focuses on Muslims and American popular culture.

Posted at 10:29 AM in Media Appearances | Permalink

Got to do a little introduction to my art, the value of communication, and integrity, on the Word of Pod podcast.

Posted at 10:36 AM in Inter-faith, Media Appearances, Religion | Permalink

In their co-edited volume, Ms. Marvel’s America: No Normal (University Press of Mississippi, 2020), Jessica Baldanzi and Hussein Rashid focus on the superhero Ms. Marvel, Kamala Khan. The first Muslim superhero to headline her own series, the teenager Kamala Khan is also a second-generation Pakistani immigrant who lives in New Jersey. Her complex identities and storyline in the comic world of Marvel welcomes a multifaceted exploration, one that exists at the nexus of religion, gender, culture, race, and much more. By bringing together scholars from a range of disciplines including literature, cultural studies, religious studies, pedagogy, and communications, the edited volume engages in a fascinating conversation around the character of Ms. Marvel. The book contains accessibly written essays from and about diverse voices on an array of topics, such as fashion, immigration, history, race, and fandom. The volume also includes an exclusive interview with Ms. Marvel author and cocreator G. Willow Wilson by gender studies scholar Dr. Shabana Mir. This text is a fantastic classroom resource that can work in numerous courses on Islam, such as those that focus gender or American Islam to broad courses on religion, such as religion and popular culture. The text is also useful text for educators, such as those in primary and secondary school, who may want to incorporate Ms. Marvel in their own curriculum.

Posted at 05:58 AM in Books, Media Appearances, Religion, Teaching | Permalink

As Ismailis, We Should all Care about Climate Change. | IsmailisRiseUp

As Ismailis, We Should all Care about Climate Change. | IsmailisRiseUp.

Our generation is faced with a daunting task: stop climate change. But how? Dr. Rashid, who has witnessed his home city of New York transition from a sub-temperate to a sub-tropical climate in his lifetime, explains that it is more than just individual responsibility. There are individual choices that we can make but ultimately when a handful of corporations are responsible for over 70% of global greenhouse gas emissions, it is hard to place responsibility on individuals. That does not mean, however, that we as individuals do not have power. Dr. Rashid says,

Those companies are all regulated by our governments. They are not governments in and of themselves and we can see the ways in which these companies are leveraging governments to not pay any taxes in the context of the United States, to have environmental regulations lifted for them, to get waivers for themselves. They don’t actually vote anybody in. They simply use the money we give them to then buy policies and politicians that create policies that are harmful to us. So essentially, we are paying for our own destruction. And so for me as an individual, I think about the individual things I can do to protect the environment, and I can make an individual decision as to where I am going to do my business.

Posted at 10:22 AM in Media Appearances | Permalink

A fun little interview I did for Columbia College Today.

What, if anything, about your College experience would you do over?

I tried to go to as many talks as I could on campus, because we had so many great speakers. I always left feeling inspired and interested. I was generally pretty bad at reading further and really getting to know the issues some of these people were speaking about. I vividly remember talks by [civil rights activist] Yuri Kochiyama and [Muslim leader] Warith Deen Mohammed, but really only getting into their work after I left Columbia. We only stand on the shoulders of giants if we make the effort to climb.

I am humbled to be part of an amazing line-up of speakers for the Believers Bail Out Day of Action in Ramadan 2020. 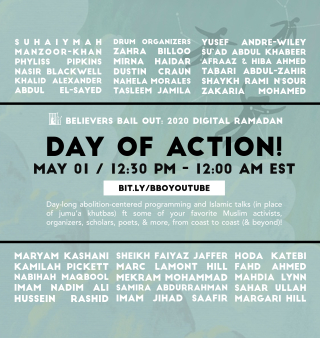 “Superheroes, of course, can’t swoop in and save us in times of crisis. But they can demonstrate ways for us to help each other with the tools we do have at hand,” says Goshen College Professor of English Jessica Baldanzi.

A new book edited by Baldanzi and Hussein Rashid, a religious studies scholar, professor and interfaith activist, aims to combat the notion of a “stereotypical” superhero. “Ms. Marvel’s America: No Normal” features essays about being Muslim and female in the Marvel Universe.

Do We Still Need Faith in the 21st Century? - Video

Belief without evidence, that’s faith. It’s the cornerstone of religion. For many, it is a centering force that’s essential for navigating life’s mysteries and challenges. But for others, ever-increasing access to information, science, advanced technology has meant a loss of faith, or at least a reckoning with what it means.

Posted at 09:48 AM in Inter-faith, Media Appearances, Religion | Permalink